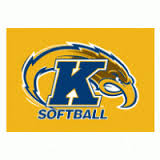 We are so proud of Holly, the daughter of one of our team members -  Lisa Speers as she made History this past weekend. She not only got 5 home runs in her last 5 at bats, but beat the former record of 4 and gaining the NCAA Division record of most consecutive home runs. What an amazing accomplishment. Not to mention one of those home runs was a grand slam.

Holly plays short stop for Kent State University and to top off a great opening weekend earlier today she was named National Player of the Week by both the National Fastpitch Coaches Association (NFCA) and USA Softball after already being named Mid-American Conference East Division Player of the Week yesterday.

It has been such a pleasure to watch Holly grow up. Having first met her when my husband coached her and my daughters soccer team. She has always been a strong athlete and has worked really hard to get to where she has gotten. We are all very proud of her and are honoured to say we knew her when... :)

Congratulations Holly! Click on the following link to read more about her amazing weekend