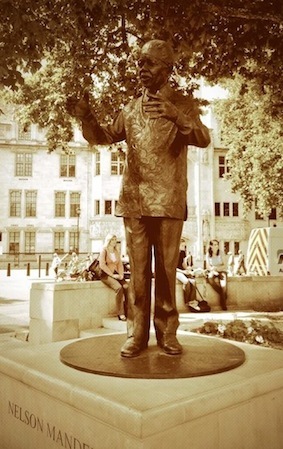 A great man passed away last week and I have been wanting to blog about him for a few days now. I thought after his impressive memorial today that it would be good to finally sit down and pay my respects.

Learning about Nelson Mandela and Apartheid was a defining moment in my childhood. I was in grade 8 and I don't think I ever truly thought about the world around me before then. My family didn't really talk about current events, that was left for social studies in school. When I left school i didn't really give the world around me a second thought. Certainly not because I wasn't brought up well, I came from a poor family and our own day to day lives always seemed more important....

Then in grade 8 my french immersion class went through a number of teachers for one reason or another until finally Mme. Monti came along and introduced us to the world around us. She was a short, birkenstock wearing, laid back funny kind of teacher. But she taught us more in the few months after she took over, than any one teacher ever taught me in my entire childhood.

We learnt a lot in those few months from topics like AIDS, which at the time people feared could be caught just by kissing or touching. To Apartheid and of course Nelson Mandela and his plight.

Despite having spent 27 years in prison, Nelson Mandela lived a LONG and amazing life. He became the first black president and with his anti-apartheid efforts helped to build a better South Africa for his people. He was a leader like no other leader that we have ever had in our world. Watching the dignitaries and heads of state from around the world peacefully come together to mourn the death of Nelson Mandela. Watching the people of South Africa celebrate his life through song and dance....even though it cannot take away the pain of his loss, it's heart warming to see how much he was loved. How much he affected change in not only South Africa but the world around him.

“People must learn to hate, and if they can learn to hate, they can be taught to love, for love comes more naturally to the human heart than its opposite... Man's goodness is a flame that can be hidden but never explained.”

Farewell Madiba (as his people so dearly called him), Farewell.